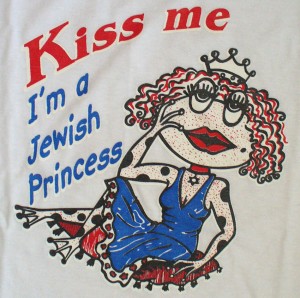 I used to complain about having a Jewish Mother until I became one.

Q: Where does a Jewish husband hide money from his wife?
A: Under the vacuum cleaner.

Q: What does a Jewish princess do to keep her hands soft and nails long?
A: Nothing at all.

A waiter comes over to a table full of Jewish women and asks “is anything alright?”

Short summary of every Jewish Holiday: They tried to kill us, we won, so let’s eat.

Many Jews observe no fewer than 16 fasts throughout the Jewish year, based on the time-honored principle that even if you are sure that you are ritually purified, you definitely aren’t.

Though there are many feasts and fasts, there are no holidays requiring light snacking.

Note: Unlike Christians, who simply attend church on special days (e.g. Ash Wednesday), on Jewish holidays most Jews take the whole day off. This is because Jews, for historical and personal reasons, are more stressed out.

The Diet Guide to the Jewish Holidays:

Cardiac Judaism: in my heart I am a Jew.
Gastronomic Judaism: we eat Jewish foods.
Pocketbook Judaism: I give to Jewish causes.
Drop-off Judaism: drop the kids off at Sunday School; go out to breakfast.
Twice a Year Judaism: attend service Rosh Hashanah and Yom Kippur.

You know you grew up Jewish when:

Q: Why don’t Jewish mothers drink?
A: Alcohol interferes with their suffering.

Q: How many Jewish mothers does it take to change a light bulb?
A: (Sigh) Don’t bother, I’ll sit in the dark, I don’t want to be a nuisance to anybody.

Q: What’s the difference between a Rottweiler and a Jewish Mother?
A: Eventually, the Rottweiler lets go.

Q: What is the most common disease transmitted by Jewish Mothers?
A: Guilt.

Q: What’s the difference between a Jewish Mother and a vulture?
A: A vulture waits until you’re dead to eat your heart out!

Q: What is a genius?
A: An average student with a Jewish Mother.

Q: Why do Jewish Mothers make great parole officers?
A: They never let anyone finish a sentence.

Q: How do Jewish Mothers get their children ready for supper?
A: They put them in the car.

Q: What business is a yenta in?
A: Yours.

Pride in finding out that one’s favorite celebrity is Jewish.

2. TORAHFIED n.
Inability to remember one’s lines when called to read from the Torah at one’s Bar or Bat Mitzvah.

3. SANTA-SHMANTA n.
The explanation Jewish children get for why they celebrate Hanukkah while the rest of the neighbors celebrate Christmas.

4. MATZILATION v.
Smashing a piece of matzo to bits while trying to butter it.

5. BUBBEGUM n.
Candy one’s mother gives to her grandchildren that she never gave to her own children.

7. DEJA NU n.
Having the feeling you’ve seen the same exasperated look on your mother’s face, but not knowing exactly when.

8. DISORIYENTA n.
When Aunt Linda gets lost in a department store and strikes up a conversation with everyone she passes.

10. HEBORT vb.
To forget all the Hebrew one ever learned immediately after one’s Bar or Bat Mitzvah.

11. JEWDO n.
A traditional form of self-defense based on talking one’s way out of a tight spot.

12. MAMATZAH BALLS n.
Matzo balls that are as good as your mother used to make.

14. MISHPOCHADOTS n.
The assorted lipstick and make-up stains found on one’s face and collar after kissing all one’s aunts and cousins at a reception.

15. RE-SHTETLEMENT n.
Moving from Brooklyn to Miami and finding all your old neighbors live in the same condo building as you.

17. YIDENTIFY v.
To be able to determine Jewish origins of celebrities, even though their names might be St. John, Curtis, Davis or Taylor.

18. MINYASTICS n.
Going to incredible lengths and troubles to find a tenth person to complete a minyan.

20. DIS-KVELLIFIED vb.
To drop out of law school, med. school or business school as seen through the eyes of parents, grandparents and Uncle Sid. In extreme cases, simply choosing to major in art history when Irv’s son David is majoring in biology is sufficient grounds for diskvellification.

21. IMPASTA n.
A Jew who starts eating leavened foods before the end of Passover.

22. KINDERS SHLEP v.
To transport other kids besides yours in your car.

23. SCHMUCKLUCK n.
Finding out one’s wife became pregnant after one had a vasectomy.

24. SHOFARSOGUT n.
The relief you feel when, after many attempts, the shofar is finally blown at the end of Yom Kippur.

25. TRAYFFIC ACCIDENT n.
An appetizer one finds out has pork.

Things we Learned in Hebrew School

Sayings of a Jewish Buddhist

If there is no self then whose arthritis is this?

Be here now. Be someplace else later. Nu? Is that so complicated?

Drink tea and nourish life; with the first sip, joy; with the second sip, satisfaction; with the third sip, peace; with the fourth, a Danish.

Wherever you go, there you are. Your luggage is another story.

The journey of a thousand miles begins with a single Oy!

There is no escaping karma. In a previous life, you never called, you never wrote, you never visited. And whose fault was that?

Let your mind be as a floating cloud. Let your stillness be as a wooded glen. And sit up straight. You’ll never meet the Buddha with such rounded shoulders.

A man walked into the Lingerie Department of Macy’s in New York City. He tells the saleslady, “I would like a Jewish bra for my wife, size 34B.”

With a quizzical look the saleslady asked, “What kind of bra?”

“Ah, now I remember,” said the saleslady. “We don’t get as many requests for them as we used to. Mostly our customers lately want the Catholic bra, or the Salvation Army bra, or the Presbyterian bra.”

Confused and a little flustered, the man asked “So, what are the differences?”

The saleslady responded. “It is all really quite simple. The Catholic bra supports the masses. The Salvation Army lifts up the fallen and the Presbyterian bra keeps them staunch and upright.”

He mused on that information for a minute and said “Hmmm. I know I’ll regret asking, but what does the Jewish bra do?

“A Jewish bra,” she replied, “makes mountains out of molehills.”

When the doctor called Mrs. Liebermann to tell her that her check came back, she replied, “So did my arthritis.”

There’s a big controversy on the Jewish view of exactly when life begins. In Jewish tradition, the fetus is not considered viable until after it graduates from medical school.

A man calls his mother in Florida. “Mom, how are you?” “Not too good,” says the mother. “I’ve been very weak.” The son says, “Why are you so weak?” She says, “Because I haven’t eaten in 5 days.” The man says, “That’s terrible! Why haven’t you eaten in 5 days? The mother answers, “Because I didn’t want my mouth to be filled with food if you should call.”

A Jewish boy comes home from school and tells his mother he’s been given a part in the school play. “Wonderful. What part is it?” The boy says, “I play the part of the Jewish husband.” The mother scowls and says, “Go back and tell the teacher you want a speaking part.”

The Harvard School of Medicine did a study of why Jewish women like Chinese food so much. The study revealed it is due to the fact that Won Ton spelled backwards is “Not Now”.

A young Jewish man calls his mother and says, “Mom, I’m bringing home a wonderful woman I want to marry. She’s a Native American and her name is Shooting Star.” “How nice,” says his mother. “And I have an Indian name too,” he says. “It’s ‘Running Deer’ and I want you to call me that from now on.” “How nice,” says his mother. “You should have an Indian name too, Mom,” he says. “I already do,” says the mother. “You can call me Sitting Shiva.”

Did you hear about the bum who walked up to the Jewish mother on the street and said, “Lady, I haven’t eaten in three days.” “Force yourself,” she replied.

My mother is a typical Jewish mother. Once she was on jury duty… they sent her home. She insisted SHE was guilty.

Q. Why is it so important for the groom at a Jewish wedding to stomp on a wine glass?

A. Because it’s the last time he’ll put his foot down.

My mother is very possessive. She calls me up and says things like “You weren’t home last night when I called. Is something going on?” I say, “Yeah, Mom. I’m cheating on you with another mother.”

A young Jewish Mother walks her son to the school bus corner on his first day of kindergarten.

“Behave, my bubaleh” she says. “Take good care of yourself and think about your Mother, bubaleh”

“And come right back home on the bus, bubaleh.”

“Your Mommy loves you a lot, my bubaleh!”

At the end of the school day the bus comes back and she runs to her son and hugs him.

“So what did my bubaleh learn on his first day of school?”

The boy answers, “I learned my name is Sammy.”

Four Jewish brothers left home for college. They became successful doctors, and lawyers and prospered. Some years later, they chatted after having dinner together. They discussed the gifts that they were able to give to their elderly mother who lived far away in another city. The first said, “I had a big house built for Mama.” The second said, “I had a hundred thousand dollar theater built in the house.” The third said, “I had my Mercedes dealer deliver her an SL600 with chauffeur.”

The fourth said, “Listen to this. You know how Mama loved reading the Torah. And you know, too, she can’t read anymore because she can’t see very well. I met this Rabbi who told me about a parrot that can recite the entire Torah. It took twenty rabbis 12 years to teach him. I had to pledge to contribute $100,000 a year for 20 years to the temple. Let me tell you…it was worth it. All Mama has to do is name a chapter and verse and the parrot will recite it.”

The other brothers were impressed.

After the holidays Mom sent out her Thank You notes.

Milton, The house you built is so huge. I live in only one room, but I have to clean the whole house. Thanks anyway.

Marvin, I am too old to travel. I stay home, I have my groceries delivered, so I never use the Mercedes…and the driver you hired is a Nazi. The thought was good. Thanks.

Menachim, You give me an expensive theater with Dolby sound, it could hold 50 people, but all my friends are dead, I’ve lost my hearing and I’m nearly blind. I’ll never use it. Thank you for the gesture just the same.

Dearest Melvin, You were the only son to have the good sense to give a little thought to your gift. The chicken was delicious. Thank you.